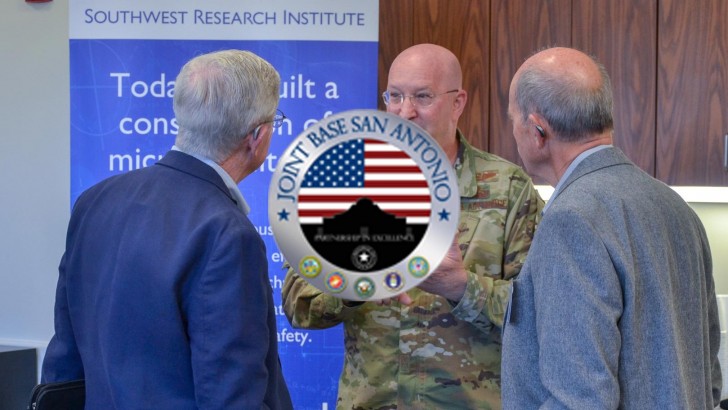 The purpose of the collaboration is to create resiliency across JBSA and San Antonio against a potentially catastrophic electromagnetic pulse or other events that could cause a long-term regional power outage and to assist in meeting the requirements of Presidential Executive Order 13865, “Coordinating National Resilience to Electromagnetic Pulses.”

Electromagnetic pulses can result from solar events or from man-made nuclear or pulse-power devices.

A nuclear EMP has the potential for the greatest effect because of its broadband nature and large area of coverage, according to the Department of Energy. It has the potential to disrupt, damage, or destroy a wide variety of electrical and electronic equipment, making it a viable threat to nationwide electrical grids, thus a threat to national security and public safety.

A nuclear EMP affecting the San Antonio area could also greatly impact military operations, which is why Brig. Gen. Laura L. Lenderman, 502nd Air Base Wing and JBSA commander, adopted the pilot project. Her intent for SA-EMD is to ensure JBSA will continue operations in the event of an EMP, a cyber attack or even a physical attack on the region’s power infrastructure.

To meet that objective, members of the project’s four working groups, Grid Resiliency, 5G Implementation, Planning for Long Term Regional Power Outage, and Domestic Electromagnetic Spectrum Operations, meet regularly to discuss and evaluate the potential effects and consequences of an EMP on critical assets, including infrastructure (electric, gas, water/water) and telecommunications, which are of important to JBSA and its 80,000 military and civilian members, as well as the nearly 138,000 students trained here annually.

“Members of the working groups are creating and testing capabilities to ensure the 11 military installations in the area have hardened utility infrastructures to protect them from the effects of an EMP, or can recover quickly after an event takes place,” he said.

The SA-EMD currently has 200 subject matter experts from more than 60 organizations and is open to anyone with an interest in participating in one of the working groups.

“The NSCC at UTSA builds success by creating a continuous collaborative ecosystem among government and industry partners like CPS Energy and leading urban research institutions,” Walsh said. “UTSA and Southwest Texas Research Institute, in collaboration with other research institutions around the country, are achieving new heights by partnering with federal, state and city government agencies to define, measure and achieve national security goals and help secure the energy grid.”

As the SA-EMD working groups continue to build their model for success, participants also ensure their proposals are ones that can be replicated across the Department of Defense, have the goal of deterring enemies from using EMP as a weapon, and, as 5th-Generation cellular networks are developed, ensure risks and opportunities are integrated with commercial plans,” Stamper said.

“SA-EMD will continue adding partners, while steering toward normalization of JBSA’s Electromagnetic Defense by 2022, and ensuring sustainability of military operations by staying one step ahead of the nation’s adversaries, Stamper added.

“We are ahead of everyone else on this effort,” he said at the meeting, reminding attendees that an EMP does not have to be detrimental to operations. “It is not a crisis when you are prepared.”

Lenderman agrees and appreciates the community’s efforts to protect JBSA.

“There has been great collaboration between the military, industry, academia, and of course, this incredible community,” Lenderman said of the SA-EMD, adding that the synergy in San Antonio is unlike any other.

“Last year, our community learned about electromagnetic pulse and its related consequences,” Lenderman said. “Today, our team is leading the national effort to develop solutions to mitigate it.”